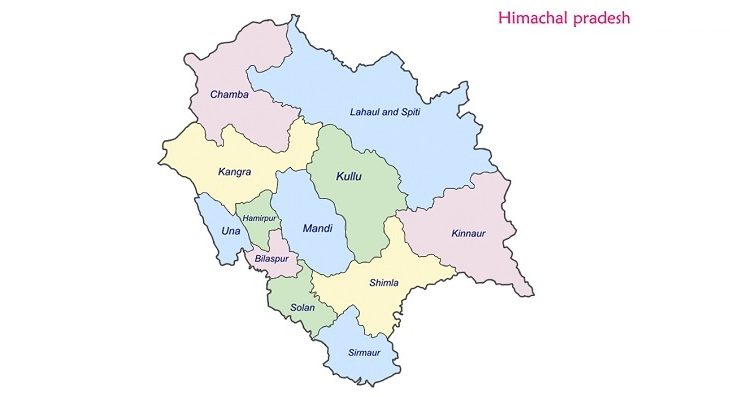 Today I am going to share a list of Himachal Pradesh districts by area, population, density, and education.

Please note that the list is sorted by area only but you can read all other information according to the census 2011.

Lahaul Spiti is the largest district of Himachal Pradesh. Most of the area remained covered by snow 12 months. That’s the reason Lahaul Spiti has the lowest population density.

The second-largest district of Himachal Pradesh, Chamba is known for art, craft, painting, handicrafts, and textiles.  Chamba is also called the valley of milk and honey.

Few tourist attractions of district Chamba are Khajiar, Banikhet, Manimahesh, and Chamera lake. There are also lots of temples to visit and worship.

The Kinnaur district of Himachal Pradesh is known for its mountain, Apple and road structure. Similar to Lahaul Spiti, more than 50% of its area is remained covered in the white snow. Kinnauri and Lahaul peoples are known for their lifestyle and culture.

Kangra is the most populated district of the Himachal Pradesh with 14 tehsils. The district is fully loaded with the famous temples, tourist places, and Pahari culture. McLeodganj near Dharamshala is an internationally-recognized place due to Dalai Lama, a famous religious figure.

Kullu district of Himachal Pradesh is also known as “Valley of God“, is famous for its festival “Dushara”. Kullu is located in the middle of the Himachal. The district has a lot of temples and tourist places to visit.

Shimla, also known as “Queen of Hills“, is one of most famous tourist destinations of north India. Thousands of tourist visit beautiful places in Shimla everyday in winters. Shimla is capital of Himachal Pradesh and places for most of the administration offices. The famous Himachal Pradesh University is also in Shimla.

Shimla is known for its beautiful mountains, apple business, and some of the famous tourist attractions like Ridge, Kufri, Green Valley, Jakhoo Hill, Chail, and Christ Church.

It is home of some famous Lakes in Himachal Pradesh. Some of its tourist attractions are Prashar Lake, Kumru Nag Lake, Pandoh Dam, Rewalsar Lake, Bhutnath temple, and Barot.

District Sirmour is famous for Churdhar Peak and largest producer of flowers in Himachal Pradesh. It’s believed that Lord Hanuman came here for the “Sanjeevni Booti” to save Lakshmana. The largest natural Lake (Renuka Lake) of Himachal Pradesh is also situated in the Sirmaur. Renuka Lake is Thousands year old.

Asia’s one of the biggest fossil park Shivalik is also in the district Sirmaur. Other than these famous places there are more tourist attractions like Nahan, Rajgarh, and many more.

Named after the Hindu goddess Shoolini Devi, Solan is one of the fastest-growing (urban planning, Municipal corporation, and literacy) district of Himachal Pradesh. The oldest monastery of India Yungdrung Tibetan is also in the Solan.

Some of the tourist attractions of the Solan district are Kasauli, Nalagarh Palace, Shoolini Mata Temple, and Chail.

Una district is the mix of Punjabi and Pahari culture. Most of Una’s borders are attached with Punjab. Una is small in area but the second largest district of Himachal by population density. Una also holds 2nd position in the literacy rate following Hamirpur.

If you have planned to visit Bilaspur, consider visiting the Bhakra Dam and Govind Sagar Lake. Don’t forget to enjoy paragliding to see a sky view of some of its adventures.

Smallest but the most literate district of Himachal Pradesh, Hamirpur is the number one district in the literacy rate by maintaining the 88.15% with growth of 10%. The district is also on 1st spot for population density.

Some of the tourist attractions are Sujanpur Fort, Awa Devi Temple, and Tauni Devi Temple.

You may have noticed that there are lots of tourist spots to enjoy in Himachal Pradesh. All districts are loaded with lots of temples, lakes, hill stations, and other tourist places.

Hope you got what you are looking for in this list of Himachal Pradesh districts by area. Let me know if there something you feel need to be added in the list.