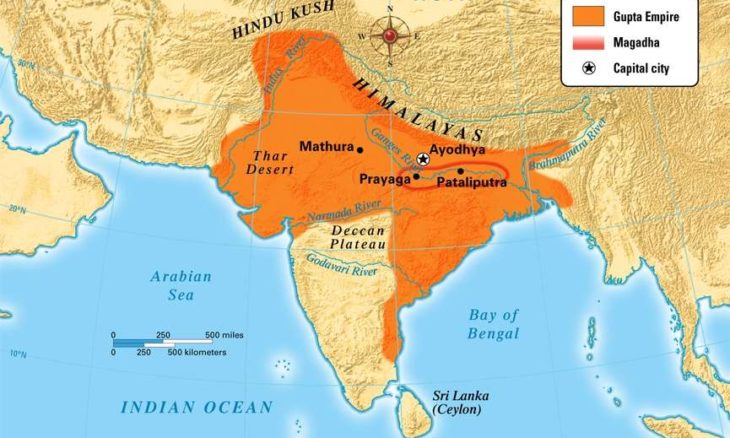 Those who are interested in history can get their day’s feed from this list of 10 Greatest empires of Indian history. The list given below not only focuses on the geographical extent but also brings attention to the economy and prosperity of the empires in different spheres.

Established by an Indian dynasty, Maurya Empire was the earliest and the biggest empire in Indian history. It began in 250 B.C.E and was spread over an area of 5000000 square kilometers. It was established by combining the two states of Northern India and developed when there was the rise of Alexander the Great. Though the empire was founded by Chandragupta Maurya, the policies and laws were formulated by Chanakya ministers.

The Kushan Empire was founded in 135 B.C.E. in the Bacteria region of Afghanistan. It was founded by Yuezhi nomads who were migrated from Xinjiang. They expanded the Greco-Bactrian Kingdom over the Hindu Kush mountains. It was under this empire that the routes between India, China, Rome, and Persia.

Mughal Empire was established in 1690 CE by the Mongol ruler when he overpowered the Sultan of Afghanistan. It was spread over an area of 4000000 sq. kilometers. This empire ruled parts of Afghanistan, Balochistan and Indian subcontinent. The Mughal Empire not only preserved the features of Mongol customs but also introduced Islam into the empire. It was known as the “Gunpowder Empire”.

Based in Magadha region, Gupta Empire established in 400 CE and it covered an area of about 3500000 sq kms. The empire was under the leadership of Gupta and it conquered most of South Asia. This was the empire when India prospered in its civilization and its golden age. The main achievements of the Gupta Empire were artistic and intellectual achievements.

Also known as Gujara pratiharas, the Pratihara Empire was founded in 650 CE. It originated in Western India after the disintegration of the Gupta Empire. This empire brought the rise of Rajputs who were dedicated to martial prowess, fortification and warfare with the zeal that was not found in India before that.

The Maratha Empire was founded by Chhatrapati Shivaji Bhosle and covered much of India and encompassed an area of over 2.8 million square kilometers. It was during this empire that Hindu rule was re-established in India. The Marathas derived from the western Deccan and they rose their prominence in the region of Ahmadnagar and Bijapur.

It was one of ruling dynasties in Southern India. The unique thing about this empire was that it was a naval empire. The Cholas had their roots in Tamil Nadu and had been there since the second century B.C.E. Cholas were known for their maritime expeditions.

It was a royal Indian dynasty which conquered and ruled the large parts of central and southern India. The Chalukya Empire remained there between the 6th and 12th centuries. They ruled India as three different dynasties which were- “Badami Chalukyas”, “Eastern Chalukyas” and the “Western Chalukyas”.

The Khilji Dynasty was a Muslim dynasty and Khiljis ruled the different parts of South Asia from 1290-1320. Khiljis were the second dynasty that ruled Delhi Sultanate and the empire was led by Ala-ud-din Khilji. Before their expansion into the regions of India, they were concentrated in Turkestan.

The establishment of Turkish rule in India destroyed Buddhism and introduced the Muslim religion. Then Sultan Muhammad of Ghur led his first raid in 1175 along with his lieutenant and conquered Delhi in 1193. It was the first Turkish dynasty and was known as the Slave Dynasty.

So, these were the most famous Empires in Indian history, which are still remembered as an example.