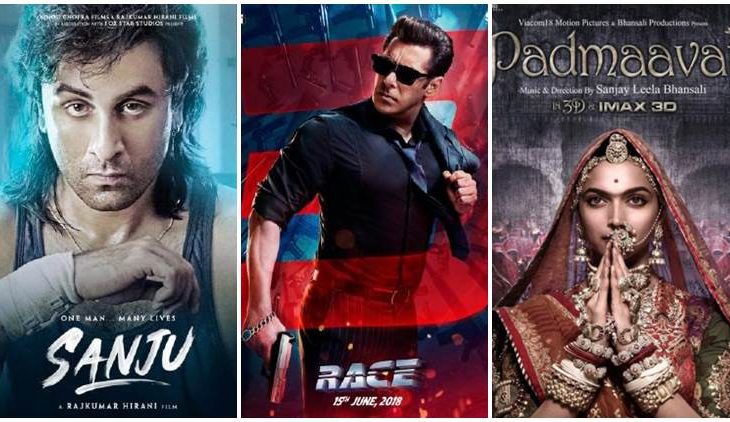 Bollywood movies never fail to surprise us. Bollywood has a history of making some spectacular movies in all genres. 2018 can be called a successful year for Bollywood, thanks to these amazing movies. All kinds of movies ranging from historical to drama came out and tasted success in 2018. Some movies tackling important social issues were also praised immensely.

Here is a list of the top 20 Bollywood movies of 2018 that stole everyone’s hearts!

Padman was released in 2018 and brought out an important subject that is never discussed openly in public. A movie related to women’s menstruation and menstrual hygiene, it is a powerful one. Interestingly, it is based on a true story and was greatly lauded by the audience. It stars Akshay Kumar, Radhika Apte, and Sonam Kapoor as the lead protagonists in the movie. It did very well on the box office.

Padmavat was one of the most talked about movies in 2018. It raised a lot of controversies in the Indian political scene because of some of the customs and rituals of Rajputs that it portrayed in the movie. Nevertheless, the movie was released after a lot of cuts in the script and still managed to earn a hefty income on the box office. Starring Shahid Kapoor, Deepika Padukone, and Ranveer Singh, Padmavat is a delight for the eyes!

Sonu Ke Titu ki Sweety is another pleasant surprise that was released in 2018. It has new and fresh actors,and the storyline is also different from the regular movies. It is a romantic comedy with some hint of bromance that keeps the audience engaged throughout the movie. It was appreciated by the audience,and it definitely deserves to be in the top 10 list for 2018.

Sanju is an incredible movie that will definitely leave you inspired. It shares the story of the superstar Sanjay Dutt and his journey in the Bollywood industry. He struggled with drugs and women most of his life, and this movie delineates the challenges in his life and how he overcame them with the help of a good friend.

I recently published a list of the top 20 Bollywood movies of 2019 as well.

Raazi is again a movie based on the true story of a spy. The movie raised several emotions amongst people and was deeply appreciated by everyone. It stars Alia Bhatt as a Kashmiri girl with regular dreams and ambitions that are cut short when she volunteers to become a spy for the Indian government and expose important national secrets for her country. Another must-watch!

Parmanu: The City of Pokhran is a movie based on the second nuclear tests of India that took place in a confidential manner. It is an interesting movie that sheds light upon the events that unfolded around that time. It is also inspired by true events and was an interesting watch in 2018.

Badhai Ho is another classic must-watch movie from 2018 with Ayushman Khurana’s amazing performance. It touches upon an interesting subject of pregnancy at an older age. The topic is sensitive,but it is dealt with utmost sincerity and humor. The movie and the performance of all the actors were lauded in the Filmfare awards too. It is a funny movie that you can watch with your family.

Andhadhun was another brilliant performance by Ayushman Khurana in 2018. It is a suspense, thriller, comedy genre that will keep you completely hooked throughout the movie. This movie can be explained as something like a comedy of errors and will entertain you thoroughly. It was released towards the end of 2018 but surprised the audience pleasantly.

Rani Mukherjee starrer Hichki is a great movie that shows how a good teacher can change the lives of thousands of students.

Raid’s USP is the revamp of Nusrat Fateh Ali Khan’s song and amazing performances by Ajay Devgan and Ileana D’Cruz. You can enjoy it with friends and family.

Bollywood gave us some amazing movies in 2018, and this list will definitely help you choose a movie for your next Bollywood night!